An online conference was held on Tuesday the 31st of May 2022 on “Human Genetic Basis of Tuberculosis”, a research project financed by SCOR Foundation for Science, with Laurent Abel, member of the Scientific Board of the SCOR Foundation, Research Director at the Institut National de la Santé et de la Recherche Médicale (Paris), co-founder with Jean-Laurent Casanova of the Laboratory of Human Genetics of Infectious Diseases at the Necker Medical School.

Tuberculosis (TB) is caused by Mycobacterium tuberculosis (Mtb). More than nine million individuals worldwide develop TB each year, and an estimated one third of the world population is infected with Mtb. Most infected subjects develop latent TB infection, with only ~10% going on to develop clinical TB. What accounts for the natural resistance of most infected individuals, and the predisposition to TB of only a few? This is the most fundamental question in the field of TB, and despite 50 years of research into the mechanisms of protective immunity to Mtb, it remains unanswered. A century of surveys in genetic epidemiology (e.g. twin studies), half a century of genetic studies in animal models of TB, and a decade of investigations in human molecular genetics, have provided firm foundations for the investigation of TB from the standpoint of human genetics. In particular, the investigation of a rare condition characterized by selective susceptibility to weakly virulent mycobacteria (BCG vaccine and environmental mycobacteria), and designated as Mendelian susceptibility to mycobacterial disease (MSMD) provided the first genetic clues. Mutations of 17 genes related to the IFN-γ pathway have been found to underlie MSMD, and paved the way for the demonstration that TB can be monogenic. TB patients carrying rare mutations in MSMD genes (in particular IL12RB1 and TYK2) provided proof-of-concept.

The hypothesis of the project was that TB results to a large extent from a collection of rare, single-gene inborn errors of immunity, ie diverse variants of genes with a strong impact on immunity during Mtb infection. During these 3 years, we have identified several novel genetic etiologies of TB and/or MSMD. These findings led to 7 articles in journals of the highest level including Cell, PNAS, Science Immunology, Nature Medicine, or Journal of Clinical Investigation in which the SCOR Foundation is acknowledged (1-7). All the identified defects, except ZNFX1, are located in the IFN-γ pathway confirming the major role of this circuit in the development of TB. The ongoing investigations of ZNFX1, a gene with a largely unknown biology, may provide clues in novel pathways involved in the response to mycobacteria. Of importance, we have also found the first complete deficiency of the IFN-γ gene itself.

Our most important result is probably the identification of homozygosity for the TYK2 P1104A as the first identified common monogenic cause of TB. Homozygosity for the TYK2 P1104A variant underlies a sizeable proportion of TB cases, perhaps accounting for ~1% of TB cases in Europeans and ~0.5% of cases in most other regions of the world (i.e. outside Europe and Eastern Asia). A large number of P1104A-related TB cases would have major implications for the prevention and treatment of TB. Genetic testing for this variant may be warranted before travel to countries highly endemic for TB. The vast majority of P1104A homozygotes living in the most developed countries are asymptomatic, as they have not been exposed to M. tuberculosis. This discovery further blurs the dichotomy between rare monogenic etiologies (rare variants with a large effect) and common risk factors (common variants with a modest effect). We are now searching for other monogenic but common causes of TB taking advantage of our unique cohort of TB patients we have collected.

All our findings pave the way for a novel and paradigm-shifting approach to the rational design of novel immune system-restoring treatments of TB, fundamentally different from current vaccines and antibiotics. The basic concept is to restore a partially deficient immunity in some “predisposed’ subjects at the level of most infected ‘resistant” individuals who are naturally protected against the development of clinical TB. These novel immune system-restoring treatments of TB are of major interest to complement classical antibiotic treatments in the present context of an increasing number of MDR and XDR Mtb strains with some of them being totally drug-resistant (TDR). The best example of these treatments is provided by injections of recombinant IFN-γ that be should beneficial in patients with impaired production of IFN-γ such as patients identified in this project who are homozygous for TYK2 P1104A, or deficient inPD-1, T-bet, or IFN-γ. 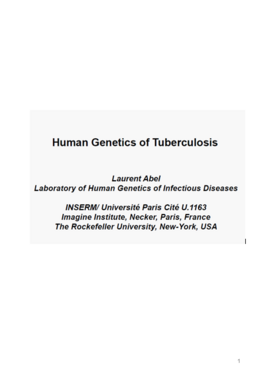