In September 2017, the SCOR Corporate Foundation for Science and the Paris School of Economics created a research chair in Macroeconomic Risk, which was renewed in 2021 for a period of three years until 2023.

The chair is held by PSE and headed by Gilles Saint-Paul (PSE, ENS) as Academic director and Axelle Ferrière (PSE, CNRS) as Executive director.

In many economies, a multitude of factors are contributing to current uncertainty about the - macroeconomic environment, including:

In addition, the issue of “macroeconomic risk” is also related to the possibility of infrequent but major shocks.

The SCOR–PSE chair aims to promote the development and dissemination of research into several areas linked to macroeconomic risk, which are of common interest to SCOR and PSE, including:

The work of the chair includes:

Click here to consult all Chair events and associated information.

The SCOR-PSE Chair, created in 2018 by the SCOR Foundation for Science and the Paris School of Economics (PSE), has presented its 2021 Junior Research Prize to Edouard Schaal and Mathieu Taschereau-Dumouchel, respectively Research Professor at CREI (Centre de Recerca en Economia International) and Assistant Professor of Economics at Cornell University. The award ceremony took place online on Thursday, March 24, 2022, and was followed by a presentation of the winning paper “Herding Through Booms and Busts” by the authors. The judging panel was headed by Gilles Saint-Paul, professor at ENS and PSE, and scientific director of the Chair. 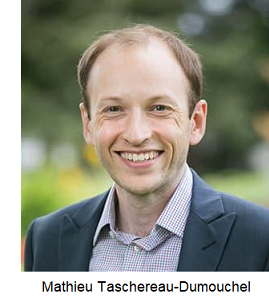 Business cycle history is replete with examples in which new technologies have led to periods of massive investment that ended in severe economic downturns. One salient example is the 1990s boom in information technologies that culminated in the stock market crash of 2001 (“dot-com bubble”). While extreme enthusiasm about new technologies was initially fueled by the high volume of investment and rising valuations of IT companies, a crash eventually followed as some of the expected returns failed to materialize. Recent technological advances have reignited the debate over the potential negative spillovers that innovations can have on macroeconomic stability.

The selection committee headed by Gilles Saint-Paul, scientific director of the SCOR-PSE Chair, has decided to award this year’s prize to Ludwig Straub and Robert Ulbricht, respectively Assistant Professor at Harvard and Assistant Professor at Boston College. The award is in recognition of their work titled "Endogenous Uncertainty and Credit Crunches”. In this paper, Ludwig and Robert develop a model with uncertainty and financial frictions to understand why financial crises usually generate large and persistent economic contractions.

At the heart of the paper lies the idea that greater uncertainty and bad economic conditions reinforce each other, channeled through financial constraints and learning dynamics. An initial tightening of credit constraints restricts firms’ access to funding: Some firms exit, which results in an increase in uncertainty as investors cannot learn about the productivity of inactive firms. Increased uncertainty fuels investors’ pessimism, which restricts even more firms’ access to funding, and further amplifies the recession. Taken together, this model explains why a temporary financial shock can develop into a large and persistent “funding freeze”. The paper, which highlights the role played by the interaction of informational and financial frictions, also has important policy implications: for instance, direct transfers to firms should be favored over banks’ recapitalization.

The selection committee headed by Gilles Saint-Paul, scientific director of the SCOR-PSE Chair, has decided to award this year’s prize to Maryam Farboodi, Assistant Professor of Finance at the MIT Sloan School of Management for her recent paper titled “International and Voluntary Exposure to Counterparty Risk”. In this paper, Maryam develops a model of the financial sector in which endogenous intermediation among debt-financed banks generates excessive systemic risk.

There is overwhelming evidence that interbank markets exhibit a core-periphery structure, which may increase systemic risk. In line with this observation, this work provides a new theoretical framework to analyze the endogenous formation of networks in the financial sector. Maryam then shows that the interbank network generated by the model is socially inefficient: Banks who make risky investments overconnect, exposing themselves to excessive counterparty risk, while banks who mainly provide funding end up with too few connections. Overall, her work suggests that explicitly modeling the interaction between banks’ incentives to capture higher returns, with intermediation, a necessary mechanism to allocate liquidity within the financial system, jointly explains the stylized facts about the global structure of interbank networks, interbank interconnectedness, and gross and net exposures among financial institutions. Moreover, by providing sharp predictions about sources of inefficiency in interbank relationships, the model contributes to the heated policy debate on how to regulate the financial market.