The aim of the project was identify and characterize novel single-gene inborn errors of immunity responsible for childhood and adult TB (tuberculosis). This objective was achieved by using 1) cutting-edge genome-wide strategies, including, in particular WES (whole exome sequencing) analyses, and 2) in-depth functional studies to validate the genetic variants identified. This strategy was applied to a unique collection of patients with either childhood or adult TB, based on a large international network of collaborations.

For this purpose, INSERM had a large sample of TB patients. For childhood TB, the patients included in this project were children (<18 years old) with a life-threatening, disseminated form of TB requiring hospitalization. For adult TB, only patients > 18 years with bacteriologically confirmed pulmonary TB were included. The main sample was collected in Morocco, from a total of more than 1200 pulmonary TB patients as well as from 1000 TB-infected healthy controls, as assessed by positive Tuberculin skin test and Quantiferon test. The WES performed during the project led to a total of 500 pulmonary TB patients and 250 TB-infected healthy controls with available sequencing data. In addition, we also collected MSMD patients (Mendelian Susceptibility to Mycobacterial Disease), as the investigation of those patients could provide critical information for the genetic basis of TB, as previously shown. The analysis of the WES data of these TB and MSMD patients has provided several major findings over the three last years, which are detailed in the report.

The hypothesis of this project was that TB results to a large extent from a collection of rare, single-gene inborn errors of immunity, i.e. diverse variants of genes with a strong impact on immunity during Mtb infection. This hypothesis has become experimentally testable with the advent of next-generation sequencing (NGS) technologies, whole-exome sequencing (WES) in particular. Therefore, the objectives of the project were to search for and characterize the underlying genetic defects, using :

Overall, during these 3 years, the researchers identified several novel genetic etiologies of TB and/or MSMD. These findings led to seven articles in journals of the highest-level, including Cell, PNAS, Science Immunology, Nature Medicine, and the Journal of Clinical Investigation, in which the SCOR Foundation is acknowledged. All the identified defects, except ZNFX1, are located in the IFN-γ pathway, confirming the major role of this circuit in the development of TB. The ongoing investigations of ZNFX1, a gene with a largely unknown biology, may provide clues in novel pathways involved in the response to mycobacteria. Importantly, the researchers have also found the first complete deficiency of the IFN-γ gene itself.

All the findings pave the way for a novel and paradigm-shifting approach to the rational design of novel immune system-restoring treatments of TB, fundamentally different from current vaccines and antibiotics. The basic concept is to restore a partially deficient immunity in some “predisposed’ subjects at the level of most infected ‘resistant” individuals who are naturally protected against the development of clinical TB. These novel immune system-restoring treatments of TB are of major interest to complement classical antibiotic treatments  in the present context. 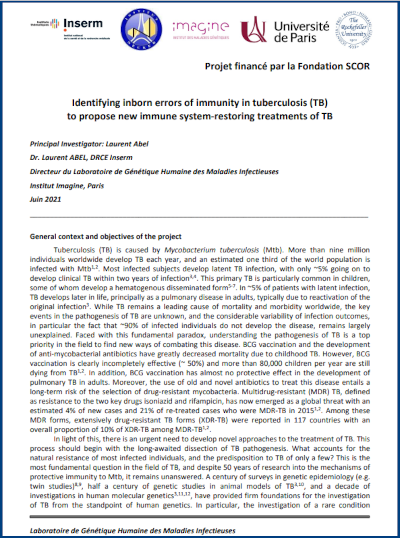 An online conference held on Tuesday the 31st of May 2022 on “Human Genetic Basis of Tuberculosis” with Laurent Abel, member of the Scientific Board of the SCOR Foundation, Research Director at the Institut National de la Santé et de la Recherche Médicale (Paris), co-founder with Jean-Laurent Casanova of the Laboratory of Human Genetics of Infectious Diseases at the Necker Medical School.
Click here to know more